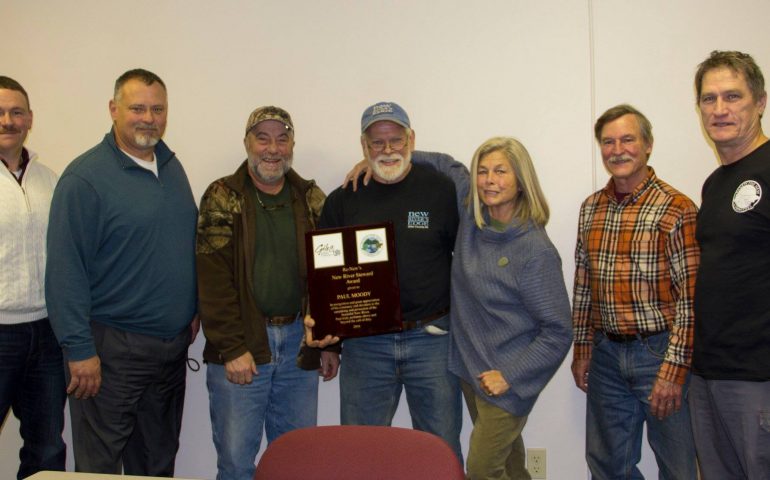 Our ReNew the New group is constantly doing things to help keep the river clean and enhance the beauty of the New River Water Trail. I am extremely grateful and humbled to have been recognized by my peers presenting me with this award.

ReNew the New recently recognized Paul Moody for his decade long work with the committee and his outstanding dedication to the New River. The ReNew Committee is made up of outfitters, county officials, and citizens with a passion for and commitment to the New River. No one working with the group has given more time, sweat and careful attention to ReNew’s mission than Moody.

For more than ten years, ReNew The New has taken on the stewardship of the thirty-seven miles of the New River that flow through Giles County. In addition to sponsoring two annual cleanups, ReNew has pushed for stricter litter laws, promoted kiosks and fishing line disposals at county boat landings, recognized outstanding law enforcement officers acting on behalf of the river, advocated for a local game warden; helped promote river safety and sponsor new and updated boat landings. This past August, Giles County’s ReNew led a New River Valley-wide cleanup including Radford City, Montgomery and Pulaski Counties. The event was sponsored by the NRV Regional Commission and involved almost six hundred volunteers. On November 9, Renew the New was given the Virginia Soil and Water Commission’s Merit Award, which Paul Moody accepted in New Kent County, VA, on behalf of ReNew.

Paul Moody spent the Sundays of his childhood fishing on the river with his father and became forever ‘hooked’ on the New River. He was a decorated solider during the Vietnam war era and, after serving with the 82nd Airborne out of Fort Bragg, NC, he went to Bluefield State College and eventually took on a position as a mechanical piping designer with the TVA in Knoxville, Tennessee. He spent his Sundays on the Tennessee River at the base of the Smokey Mountains. But the Smokies weren’t Peter’s Mountain and the Tennessee River wasn’t the New. The New River Valley kept calling him home and Moody eventually found a way to return, permanently. He bought a former stone quarry-turned-trash-dump along the river in Pembroke. Moody cleaned up the place and established New River’s Edge, an outfitting business and a riverside retreat.

Paul Moody’s knowledge of the river and its ways, his donation of hundreds of hours to scouting, advocating and organizing for ReNew made Moody—who was a founding member of ReNew The New— the obvious choice for the organization’s highest recognition, “New River Steward.”

ReNew’s spring cleanup, “Ramps and Roads” is scheduled for March 25. Schools, organizations, and citizens are invited to come out and help clear the Giles roadways and boat landing of litter. If you join in that Saturday morning effort, you’ll be sure to see Paul Moody heading one of the crews.